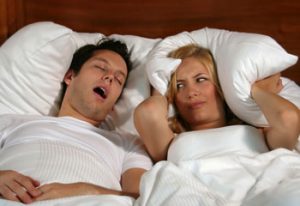 Simon swore never to snore again only to falter later. The following night he was at it again. Deep slumber had engulfed him and made him completely oblivious to the woes of his fiancé yet again. She sat on the corner of the bed, a frown of disgust spread across her face. She vowed to break up with him for she had had enough of those sleepless nights and was completely fed up now.

This was to give you some idea about how mind-boggling a menace this seemingly small problem can become. And to ensure that you don’t end up like Simon, we have the following remedies and tips to stop snoring for you-

1.Get Rid of that Belly Fat
Being obese brings with it a myriad of problems. Apart from the increased risk of major life-threatening diseases, it is also known to play a role in exacerbating the malaise of snoring. Obesity leads to a deposition of fat in the throat tissues which causes an increase in sound when these tissues vibrate during sleep. Another possible remedy is to raise the head end of your bed by about 4-5 inches. This can ameliorate the situation by making your air passage more open than it was before.

2.Get the Position Right
Sleeping on the back carries with it the risk that the tongue may fall backward and block the airway partially especially if the throat muscles are loose. This makes the passage of air difficult which means the snoring will only increase in intensity. Therefore, sleeping on one side is advised to snorers so that the tongue doesn’t become an obstruction.

3.Use Nasal Sprays
If you are a habitual snorer, use nasal sprays or other such tools that can help you combat the problem quite effectively. Nasal sprays lubricate the mucous membrane and tighten the throat tissues. While there are many other forms of treatments, nasal sprays are one of the least intrusive methods and quite effective at the same time

4. Ditch the Alcohol
Avoid alcohol at all costs before sleeping. Its consumption relaxes the muscles of the throat a bit more than normal causing even the non-snorers to start snoring. No prizes for guessing what effect it will have on regular snorers then.

5. Drink adequate water
Drinking plenty of water before sleep helps keep snoring down to the minimum. In the absence of water, nasal and oral secretions gets stickier leading to more friction in these oral sections. Consequently, snoring assumes bewildering proportions with no sign of subsiding.

How to stop snoring is one of the most frequently asked health questions. Therefore, it becomes imperative that you tackle this menace sensibly and take appropriate corrective measures like the ones listed above. Seemingly meager, this irritating habit can prove to be a real spoiler for those around you, especially if they are trying to get a good sleep. Don’t let things get to the point that it becomes a major cause of misery. Act fast. Act now.