Snoring is a common phenomenon, and is said to have been existing ever since the humans existed. The causes can be varied and distinct.

The modern times have made the life faster. This has increased stress, furthermore, which translates into disturbed patterns of sleep. And, this in the due course of time translates into family problems that have been seen to have escalated to obtuse levels. Snoring is definitely, a problem, a little less than an epidemic. It pervades through all the age groups and the genders.

The causes of snoring

Our breathing can get obstructed during sleep because of many reasons. These reasons could be ranging from an anatomical abnormality in the nose and/or the throat or due to a simple cold. Medically speaking snoring problems occur due the throat muscles relaxing to a greater degree while sleeping

That is, the ‘opening in the throat becomes narrow’ and due to this the body tries to increase the pace of air intake. In response to the pressure increasing in the throat, the ‘uvula and the soft palate begin’ to vibrate. Moreover, this vibration produces a noise which is called snoring. So, the narrower the opening, more the vibration, and thus louder the snoring will be.

The effects of snoring

This condition broadly results in the following problems:

The sleep being disturbed is an unhealthy situation. Individuals, who are suffering from snoring problems, usually wake up tired.  Therefore, the body unable to get enough rest and productivity gets compromised.

Snoring may not have an immediate direct link to serious diseases, but when this condition progresses, it can lead to many diseases. It can result in illnesses such as OSA, high blood pressure, cancer, diabetes, coronary and brain hemorrhage.

A sleep deprived body needs more energy and the human body tries to compensate this by craving for more food than what is required.

It has been observed that people who snore often wake up with delusions, and it takes them time to get acclimatized to the reality. This can happen due to oxygen not reaching the brain properly. Therefore, the reaction time reduces massively. Memory problems, attention deficiency, and being unable to concentrate are just a few additional symptoms attached to snoring problems.

Snoring problems affects the sleeping pattern greatly. In some cases, this has also shown to have resulted in irregular pauses in breathing, and in extreme conditions, death as well. The regular pauses can be dangerously long, as much as ten seconds, and can repeat many a times during the sleep time. While these situations may go unnoticed, but sometimes the body wakes up with a jerk as a reaction to no oxygen going in. 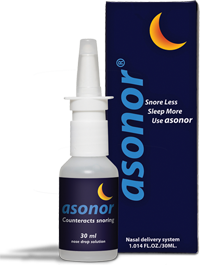 A cure for this condition requires a massive lifestyle appraisal and not simply a change. Sometimes in adverse conditions a surgery could also be prescribed. However, there are medications like nasal sprays that one could take that temporarily clear the airway by flexing the throat muscles. These nasal sprays can solve the snoring problems permanently too.

Do you need a prescription and where can I buy Asonor?

You do not need a prescription to buy Asonor.
In most countries you can buy Asonor at your local Pharmacies or you can order Asonor online safe and easy here.

How do I use Asonor® anti snoring solution?

One should use Asonor every evening before going to bed. Please avoid eating, drinking or brushing your teeth after taking Asonor, as this will reduce the effectiveness of the product.

Tilt your head back and pump into each nostril until you can feel the solution in your throat. Usually, 4 to 6 pumps in each nostril are sufficient. The liquid solution should not remain in the nose, as the effect takes place once it can be felt in the throat.

The pump delivery system has been designed to work in any direction for easy application and deliver a “jet-stream” of the solution rather than a spray or atomization (which other nose drops products use) to avoid the solution staying in the nose.

Generally, Asonor will be effective from the first night, but in rare cases the effect will not take place for up to 14 days after beginning of use.

Asonor effectively removes the cause of snoring. It is an easy and simple treatment, which relieves you from many if the nuisances snoring causes. Asonor lubricates and softens the mucous membranes in the throat, whilst also slightly tightening the musculature in the throat. This means that breathing becomes easy and unobstructed, and furthermore prevents the dry mouth that many snorers complain about in the morning.

How long will the effect last?

With 4 to 6 pumps in each nostril before going to bed, the effect of the treatment will normally begin to abate after 7 to 8 hours.

If the effect starts to abate earlier or to prolong the effect, increase the dosage to 6-7 pumps in each nostril.

I am pregnant, can I use Asonor during my pregnancy and whilst breastfeeding?

Yes, everyone can use the product.