Sleep Apnea is a sleeping disorder that occurs when a person’s sleep is disrupted by repeated breathing. It influences the way you respirate when you are in sleep. Breathing can become interrupted or can become shallow. The pause can vary from 10 to 15 seconds and the occurrence can be higher leaving you to have a light sleep. This happens because the brain and the rest of the body do not get enough oxygen.

If you snore loudly and be tired even after a full night’s sleep, you could be suffering from sleep apnea. 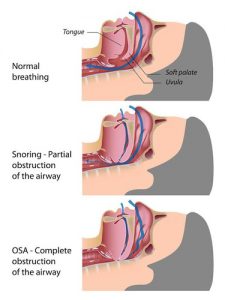 There are three types of sleep apnea. They are listed below.

1) Obstructive Sleep Apnea: This is the most probable form of sleep apnea which occurs because of blocked airway passage in the back of throat. The muscles in the throat retract when we sleep and thus, does not allow passing of enough air. This causes you to snore aloud. The louder the snoring, the narrower will be the opening in the throat.

2) Central Sleep Apnea: People suffering from central sleep apnea snore infrequently. This is not a common type of sleep disorder. This occurs when the brain declines to signal the muscles that controls breathing due to instability in the respiratory control center.

3) Complex Sleep Apnea: A combination of both the obstructive and central sleep apnea is called complex sleep apnea. 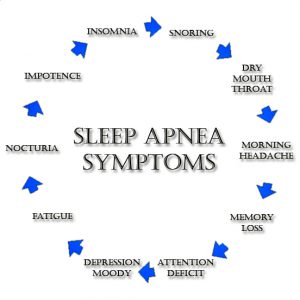 It may prove to be tough to identify sleep apnea on your own since most of them occur when you are asleep.

It may also become difficult to detect the type of sleep apnea that has occurred as the symptoms of obstructive and central sleep apnea may overlap.

Following are the symptoms of sleep apnea in general.

Sleep apnea is caused by the relaxation of your throat muscles during sleep. When the throat muscles relax, the air passage becomes narrow and does not let you breathe properly. This also lowers the level of oxygen in your blood. The brain then forces you to wake up because of unavailability of oxygen.

This behavior disrupts your sound sleep and arouses your sleep during the waking hours of the day.

Another cause of sleep apnea is that when your brain fails to transmit signals to the muscles. This could lead to disruption and awakening at night. 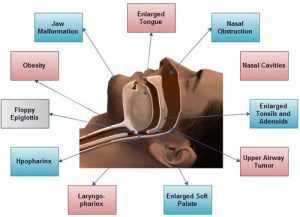 Higher risks of sleep apnea may occur if you are:

Sleep Apnea can prove to be quite risky for your health. So, it is advised to consult a doctor before it’s too late!